Embracing the Magic in the Madness of Motherhood
facebooktwitterinstagrampinterest

I am blessed to have amazing fathers in my life, chief among them my husband and my own father.

In their honor and in honor of all the other amazing fathers among my family and friends (you know who you are!), I have collected below my favorite quotations about fatherhood (some funny, some serious).  Enjoy!

(Quotes from friends and family have been made somewhat anonymous to protect their reputations :))

On Fatherhood and Fathers

JB – You can tell I have kids, because after cutting myself cooking I’m now sporting a Strawberry Shortcake band-aid.

JG [after convincing his toddler to finally lie down and go to sleep] – I should be a politician.

JG [when asked to hold a friend’s baby] – I have no milk! … I have to put on deodorant now.

CD [realizing that he hadn’t been watching his toddler] – Absentee parenting while in the room.

PL [to her daughter, who has laughed at the father’s bad joke] – Don’t encourage him.  Otherwise I’ll have to deal with this for the next six months.  (Sighs)  I need to have a training course on how to interact with your father.

JK [to her little girl] – You have your daddy’s toes. / Girl – Does that mean they’re going to stink like his? 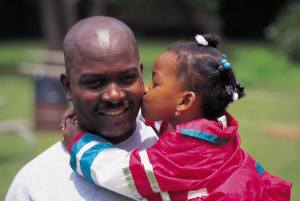 DM – You should dress the baby in a plastic cape – decorative but also functional.

Bill Cosby – Fatherhood is pretending the present you love the most is soap-on-a-rope.

[If you want a real treat this Father’s Day, find some old recordings of Bill Cosby’s standup comedy.  If you only know him through the “Cosby Show,” you owe it to yourself to listen to these.  And be sure to turn out the lights during “Chicken Heart!” dum-dum, dum-dum, dum-dum…]

Mark Twain – When I was a boy of fourteen, my father was so ignorant I could hardly stand to have the old man around. But when I got to be twenty-one, I was astonished at how much the old man had learned in seven years.

Jean Paul Richter – What a father says to his children is not heard by the world, but it will be heard for posterity.

Robert C. Whitten – The child had every toy his father wanted.

Rev. Theodore Hesburgh – The most important thing a father can do for his children is to love their mother.

Charles Wadsworth – By the time a man realizes that maybe his father was right, he usually has a son who thinks he’s wrong.

Richard Shattuck – They didn’t believe their father had ever been young; surely even in the cradle he had been a very, very small man in a gray suit, with a little dark mustache and flat, incurious eyes.  [Reminds me of how my father told us he was born wearing a tie!]

I will end with a link to what I think is one of the most moving tributes to the often unappreciated acts of service in which fathers tend to excel: “Those Winter Sundays,” as read by its author, the poet Robert Hayden.

The source for many of the above quotes is a comprehensive list of quotations about fatherhood from Fathers.net.

This post has been shared at Crazy Mama’s Monday Blog Hop and Milk and Cuddles Mommy Club.

Hmm, is this us talking about the deer or the deer

Caught between two worlds? You don’t have to be!

My kids love science, but I just don’t have the

Traveling with kids is never boring 😂😂 But n

#AD It's #backtoschool, so time to start packing t